During third week in August, our home state Kerala, faced one of the worst natural disasters it endured in recent history. Flood waters from heavy rains caused significant damage for property and human lives along the river banks and low lying areas like Kuttanadu. Recognizing the widespread devastation, NITCAA USA leadership stepped-up and decided to organize relief efforts. Volunteers under the leadership of Thomas Joseph, Mathew Keecheril and Sujith Jose set-up a fund raising campaign. Thomas Joseph, visiting Kerala during the period, helped coordination of activities on ground and ensured proper distribution to deserving groups.

Though started with a simple goal of Rs 3 lakhs worth of medicines through a non-profit organization RECCA SEWA, the program attracted many other groups. To list a few: RECCA 78, NITCA 94, Bellezea Bangalore, NITCA Singapore, KEAN, South Jersey Association, Detroit Malayalee Association, St. Gregorios Church Philadelphia, St. Basil Church Boston ….. participated through financial contribution along with good number of individuals outside NITCAA community. In addition, number of volunteer groups in Kerala joined hands with our initiative. Over Rs 50 lakhs worth of supplies were distributed. The efforts are still in progress and completed four phases until now.

During initial phase, our volunteers were able to distribute two truckloads (about 14 tons) of medicines through government channels in seven districts. These medicines prevented outbreaks of epidemics at relief camps, meeting our goal when we launched the program on August 16th. As more funds started pouring in, second phase was kicked off to distribute about 40 tons of bleaching powder and cleaning solutions, again in all seven affected districts. Third phase targeted Kuttanadu area and Pathanamthitta district for distribution of 16 tons of grocery kits to help poor families who couldn’t get out and buy items. Fourth phase, currently in progress, is distributing 2,000 mattresses to deserving families and engineering college students in affected areas.

With help from CISCO Bangalore, RECCA SEWA is developing plans for distribution of 500 computers and 30 communication centers to  schools in affected areas. Overall, we’re proud to report that the program was a big success and demonstrated NITCAA USA’s effectiveness and ability to play similar roles in the future. Links to an interim report and receipt for our funds are included here. 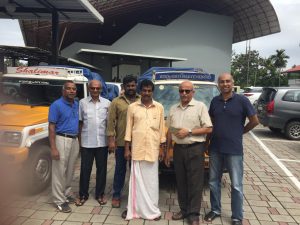